Catholic Diocese of Garissa•Who We Are

HISTORY OF THE DIOCESE

The Catholic Diocese of Garissa was established by St. Pope John Paul II of happy memories on February 3, 1984 with Bishop Emeritus Paul Darmanin as the first Bishop (1984- 2016). He was succeeded by Bishop Joseph Alessandro.

The first evangelization can be traced back to the last part of the 16th century through the Portuguese Augustinian Missionaries in Faza, on the island of Pate, and in Lamu.

The Holy Ghost Fathers were the first Catholic Missionaries from Mombasa, to establish a community in Wema and later in Hola in the late 1940’s. In 1968, the Consolata Missionaries from Meru started to work in Garissa and later moved to Wajir and Mandera. In 1974, evangelization in the area was entrusted to the Capuchin Friars of the Province of Malta. In 1976, the territory which formed part of Mombasa and Meru dioceses was declared a Prefecture Apostolic and elevated to Diocese in 1984. In the year 2000, the southern part of Garissa Diocese (Wema, Garsen, Mpeketoni and Lamu) was detached from the Diocese of Garissa to form part of the new Diocese of Malindi. The Diocese covers 142,704 Sq. kms and has seven parishes, that is, Garissa, Hola, Wajir, Mandera, Bura- Tana, Emmaus and Wenje with an estimated population of 813,330. As part of its Evangelization Mission, the Diocese is awake to the fundamental questions accompanying the human journey from the very beginning. This takes on even greater significance in our own day, because of the enormity of the challenges, the novelty of the situations and the importance of the decisions facing modern generations.

St. Pope John Paul II reminds us that “At the dawn of this Third Millennium, the Church does not tire of proclaiming the Gospel that brings salvation and genuine freedom also to temporal realities…“To the people of our time, her travelling companions, the Church also offers her social doctrine.” The main impetus of CDG’s work in this regard concerns on-going spiritual formation and social-economic transformation/ development of target communities. “Love faces a vast field of work and the Church is eager to make her contribution with her social doctrine, which concerns the whole person and is addressed to all people.”

St. John Paul II, Apostolic Letter Novo Millennio Ineunte, 50-51: AAS 93 (2001), 303-304. The Diocese runs a number of Pastoral and Development programs in collaboration with various actors. Such stakeholders include amongst others beneficiaries/faithful; peer institutions, other Churches and Church structures; people of other Faiths; the Government of Kenya (GoK); as well as various development partners. 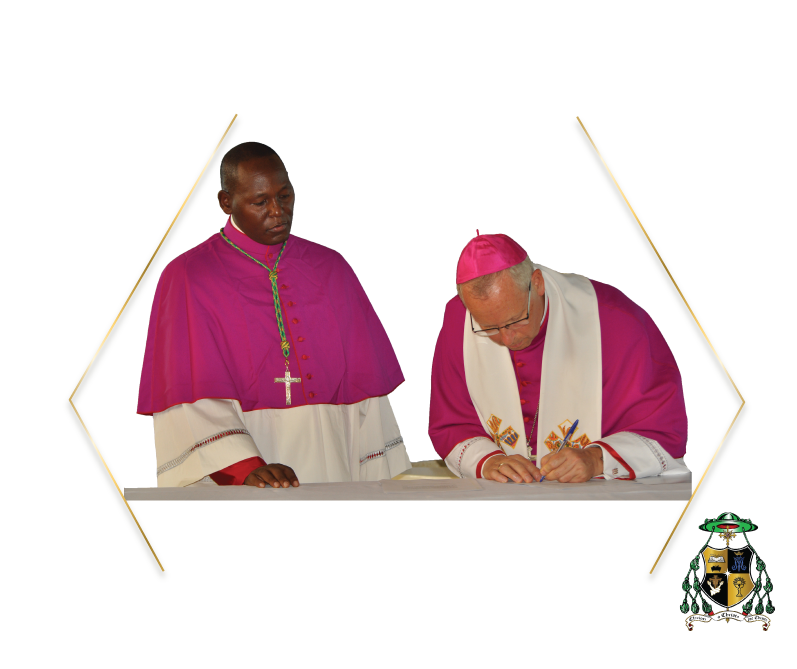